We currently have over 4816 live roles 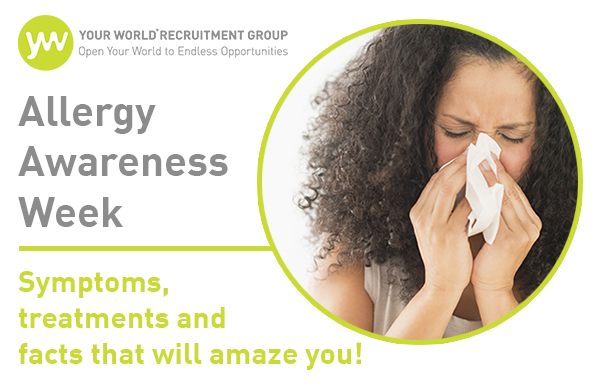 Nearly half of British adults suffer from at least one allergy, and this figure is constantly on the rise. Between 2008 and 2009 alone, the number of allergy sufferers in the UK increased by 2 million!

Allergies can affect us in a variety of ways including: eczema, asthma, anaphylaxis and allergic rhinitis (hay fever). Hay fever is something many of us suffer from, especially now the weather is starting to warm up and the flowers are in pollination. Did you know, hay fever can account for as many as 16.7 million global doctors’ visits a year!

As this week is Allergy Awareness Week, we thought we would bring to attention the different ways you can be affected by an allergy and how the symptoms can be helped (along with some crazy allergy facts!).

If you’re a pharmacist and your speciality is helping people with symptoms such as these, make sure you look at our pharmacist jobs (we’re the UK’s number one supplier of pharmacists, pharmacy technicians and ATOs)! We also have a great selection of dietitian jobs for those who work with people with special dietary requirements.

1st December is World AIDS Day to raise awareness of HIV and AIDS. We’re looking at some of the exciting HIV research and breakthroughs that happened in 2020!

How to Become a Theatre Nurse

If you’re considering becoming a Theatre Nurse, get ready for a fast-paced but enriching and rewarding career! Here’s what you need to know!