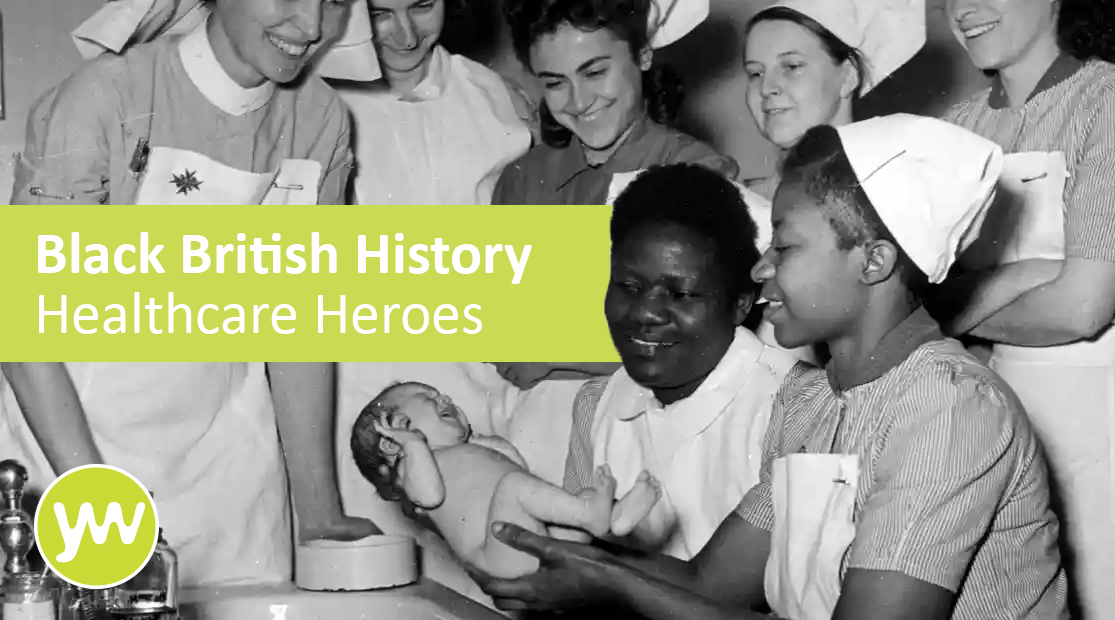 At Your World, we know that representation matters, and it matters year-round. But as Black History Month, October gives us an opportunity to focus our attention, and call for continued change.

Too often, the stories and achievements of people from Black and Ethnic Minority communities have been ignored and erased from history. This Black History Month, we wanted to highlight some BAME pioneers in Healthcare and celebrate the recognition and representation that they are finally receiving!

Mary Seacole was a British-Jamaican Nurse in the 1800s, who started as a healer in Jamaica before travelling to the UK. During the Crimean War, Mary requested to be sent as an army nurse to care for the injured soldiers, but she was refused. Determined, she decided to go on her own, funding her trip herself and establishing the British Hotel. There, she cared for the sick, injured, and recovering soldiers, often visiting the battlefield to care for the wounded there.

Seacole was celebrated as widely as Florence Nightingale, but following her death in 1881, her story was ignored and forgotten. Her North London grave was rediscovered by Caribbean Nurses in 1973, but it was not until the 21st Century that Britain began to recognise her achievements properly.

In 2003, she was named as the Greatest Black Briton following a nationwide vote, and in 2016, a memorial statue of Seacole was erected in London. Most importantly, her story is now part of the National Curriculum.

Africanus Horton was born in Sierra Leone as James Horton. He came to Britain in 1855 where he studied medicine at King’s College London and Edinburgh University and took the name Africanus as a symbol of pride in his birthplace. After getting his MD, Horton was commissioned back to West Africa as a surgeon in the British Army. During this time he developed theories that connected human health with topography (the study of anatomy based on regions of the body and the structures within that region). His theories led to a distinguished reputation within medical communities. In his book The Diseases of Tropical Climates and Their Treatment, published in 1874, Horton describes some of the clinical symptoms of Sickle Cell Disease, thirty-six years before the recorded discovery of the disease in 1910.

Horton was also a political thinker and writer, publishing books such as The Political Economy of British West Africa: with the Requirements of Several Colonies and Settlements and West African Countries and People. In these publications, Horton challenged prevalent racist views. He also championed what he called “African Nationality” and campaigned for self-government for the West African colonies. Following his retirement, he continued to champion education within Africa as a way towards self-governance, providing scholarships and demanding that a medical school was established within the region.

James Samuel Risien Russell was a Guyanese-British consultant physician and professor in Neurology. He began studying medicine in the 1880s at the University of Edinburgh and continued his postgraduate studies in London, Paris, and Berlin. In 1898, Russell became a resident medical officer at the National Hospital for Neurology and Neurosurgery. While working at the National Hospital, he completed research that contributed to our understanding of the Cerebellum (which is the lower part of the brain, which affects motor control). His research also contributed to our understanding of how vitamin deficiencies can damage the brain and spine.

Russell was a renowned neurologist, and in the early 1900s he set up his own medical practice which specialised in mental health. He also campaigned for Mental Health Law Reforms. In 2020, the English Heritage approved a Blue Plaque to be attached to the site of his private practice on Wimpole Street.

Annie Brewster was born in Saint Vincent in the Caribbean in 1858. In the 1860s, she moved to South London with her family. Brewster worked as a nurse at the London Hospital (now the Royal London Hospital), in Whitechapel for twenty years. She was known as ‘Nurse Ophthalmic’ due to her skill in treating patients with eye conditions, and she later became the nurse in charge of the Ophthalmic Wards.

Brewster was one of the first Afro-Caribbean nurses that we know worked in Britain during this period. In 2018 she received public recognition when her photograph was projected onto the side of the old Royal London Hospital building as part of the celebrations for the 70th anniversary of the NHS.

Harold Moody was a Jamaican-born physician and civil rights activist who graduated in 1910 after studying medicine at King’s College London. Despite finishing top of his class, Moody was denied work due to prejudices against the colour of his skin. Following this rejection, he established his own medical practice in South London. Moody is cited as being highly involved in the organisation of the local community during World War 2, with historians noting that ‘he was the first doctor on the scene’ in a south London bombing during the Blitz.

Moody was also an influential civil rights activist, campaigning against racial prejudice and is credited with overturning the Special Restriction Order of 1925. This order had often lead to many BAME British Nationals being made redundant. He also founded the League of Coloured People (LCP), becoming its first president in 1931, which remained a powerful force until it dissolved in 1951 – four years after Moody’s death. The main focus of the LCP was to get rid of the restrictions placed upon people due to their race within British workplaces, social life, and housing. The LCP also focused their attention on improving relations between races.

In 1995 a blue plaque was erected in Moody’s memory above his home in South London and, in 2003, he was named in the ‘100 Greatest Black Britons’ list following a public vote.  The National Gallery also honours Moody with a bronze bust, which was made by his brother.

Your World believes that all healthcare workers are heroes – whether you have a blue plaque or not! This month, why not take the opportunity to recognise your own achievements or the achievements of your BAME colleagues?