We currently have over 5018 live roles 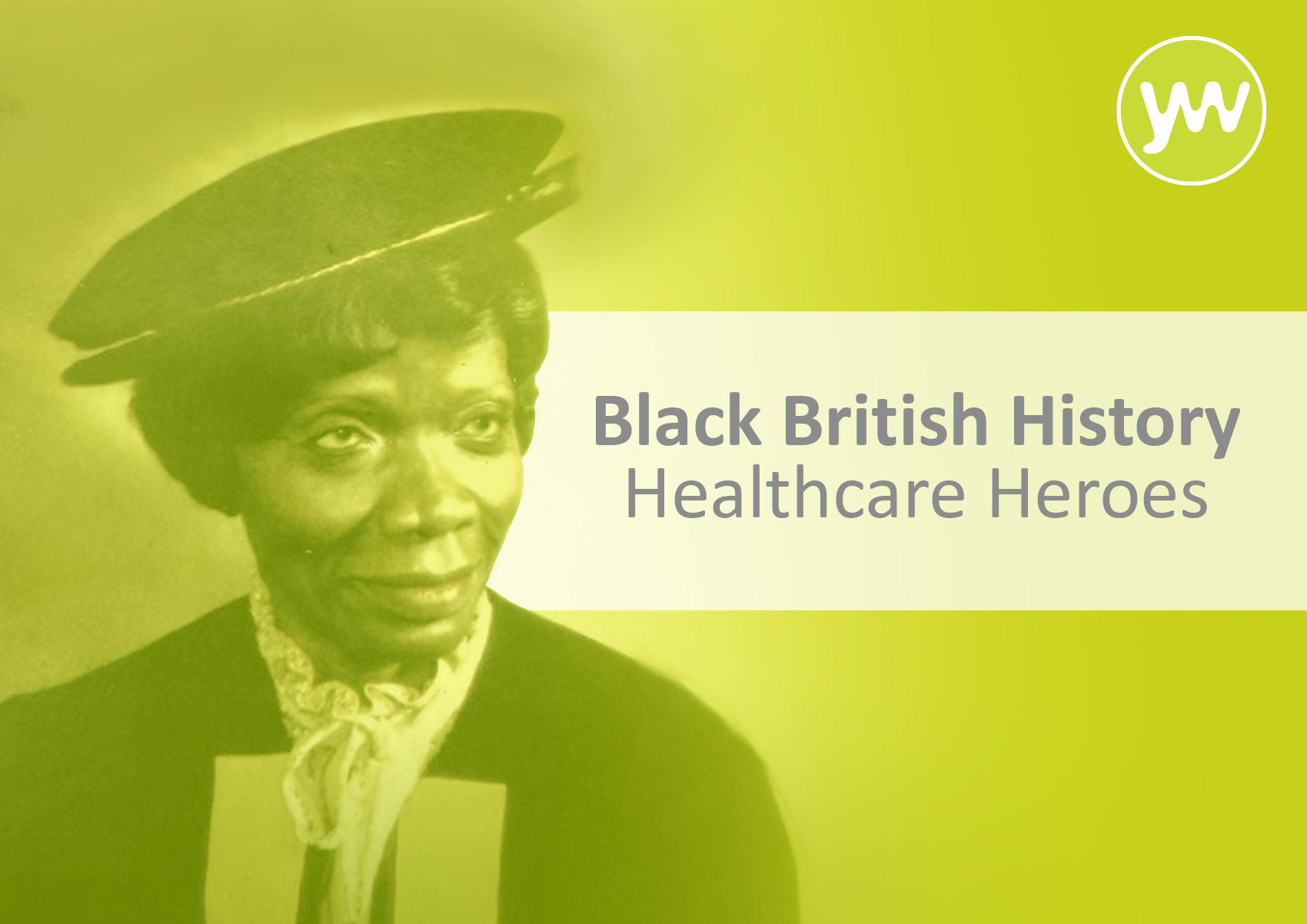 As Black History Month, October enables us to focus on the achievements and historical contributions of Black people within our communities. With historical whitewashing, many Black stories and legacies have not received the recognition they deserve, so Black History Month helps us bring forward the stories we may not have been taught in school.

Last year, we highlighted the stories of some Black Healthcare Heroes, and we have continued that this year with more profiles of people who deserve more widespread recognition. With this year's theme for Black History Month being Proud To Be, the people we have profiled this year were all proud of their Black heritage and have had an extensive impact in the fight against racism and racial discrimination.

This article focuses on Black Healthcare Heroes from history. However, we know that history is still in the making, so later in the month, we will also be sharing profiles of Black healthcare pioneers whose work continues today.

Kofoworola Abeni Pratt was the first Black nurse to work in the NHS and later became the Chief Nursing Officer for Nigeria and the Commissioner For Health for Lagos State.

Born in Lagos, Nigeria, in 1915, Pratt originally trained as a teacher and taught in a girl's school before moving to England in 1946, where she enrolled in the Nightingale School at St Thomas' Hospital in London. She qualified as a State Registered Nurse in 1950 and worked within Evelina London Children's Hospital and  St Thomas' Hospital. Not only was she the first Black nurse to work in the NHS, but she was also married – which was very unusual for nurses at the time!

Upon Pratt's return to Nigeria in 1954, she continued her nursing career despite the obstacles against her. At this point, Nigeria was still under British rule as a colony, and only British expatriates were permitted to work as a nurse by the Colonial Nursing Service. Even though Pratt had British nursing qualifications, she was initially denied a post at Adeoyo Hospital until she was supported by the Matron and was finally allowed to work. By 1965, Pratt herself was Matron.

But she didn't stop there. In the years following, Pratt racked up an astonishing number of achievements. The timeline of her career is breath-taking!

1965:  Vice President of the International Council of Nurses, becoming the first African to do so

1971:  The first Nurse Chairman of the Nursing Council of Nigeria

President of the National Council of Women Societies Nigeria

Honorary Fellow of the Royal College of Nursing FRCN

1981:  Foundation Fellow at the West African College of Nursing

Awarded an Order of the Federal Republic (OFR)

Kofoworola Abeni Pratt was a true pioneer; as the first Black nurse to work in the NHS, she led the way for generations to come. But more than that, she actively helped more Black nurses come up through setting up nursing schools in Nigeria and leading the appointment of Nigerian nurses following the country's independence in 1960.

"I have striven to obtain education, at every sacrifice and every hazard, and to apply such education to the good of our common country."

Born into slavery in 1813 in New York City, Dr James McCune Smith became the first African American person to hold a medical degree in the United States – but it was in Scotland where he studied and qualified as a doctor.

At the age of 14, Smith was freed from slavery on the 4th July 1827, the final date when New York officially released all remaining enslaved people under the Emancipation Act of New York. However, in other States, slavery persisted for almost 40 further years.

Smith attended the African Free School in New York, where he was described as an 'exceptionally bright student'. However, despite graduating at the top of his class, he was denied admission to Columbia University and Geneva Medical College because of racial discrimination. However, at the encouragement of his African Free School tutor, Rev. Peter Williams Jr, he applied to the University of Glasgow and was accepted.

At the University of Glasgow, Smith earned his bachelor's degree in 1835, his master's degree in 1836, and his medical degree in 1837. He was also trained in the emerging science of statistics – which he later put to use by publishing articles with data that refuted common arguments of those who continued to enslave Black people.

Smith also joined the Glasgow Emancipation Society, which was part of the British campaign against American slavery. (Whilst it was made illegal to own personal slaves in Scotland and England in the 1770s, it is important to remember that Great Britain was still very active in the Slave Trade until the 1800s.)

Now a qualified doctor, Smith returned to the United States, bringing with him a new mission: freedom for all. Frederick Douglass, American social reformer, abolitionist, and friend of Smith, said of Dr Smith's time in Scotland "Educated in Scotland, and breathing the free air of that country…[Smith] came back to his native land with ideas of liberty which placed him in advance of most of his citizens of African descent". Whilst it may have been easier to remain in the relative racial tolerance of Scotland at the time (compared to within the US), Smith was committed to the fight for civil rights within America.

Smith challenged racism with the medical field – replacing a doctor at the 'Colored Orphan Asylum' in New York after calling him out for racist negligence. Smith worked within the orphanage as a doctor for 20 years and implemented vast improvements, including expansions to the medical ward.

He also became the first African American to set up his own pharmacy in New York and kept the back rooms for activists to gather and discuss their abolitionist work.

Dr Smith was a central and active member of civil rights and abolitionist groups, joining the American Anti-Slavery Society, co-founding the National Council of Colored People, and directing the Colored People's Educational Movement. Smith also published numerous lectures such as "Destiny of the People of Color" and "Freedom and Slavery for Africans" and helped connect escaped slaves to people within the Underground Railroad.

Dr Smith died from congestive heart failure on the 17th November 1865, one month before the 13th Amendment officially abolished slavery.

Known in his time as the Famous Black Doctor of Paddington, John Alcindor was a World War One hero who cared for wounded soldiers upon their arrival in London – despite a racist rejection from the Royal Army Medical Corps.

Born in Trinidad in 1873, Alcindor graduated with a medical degree from Edinburgh University in 1899. Upon graduation, he worked for several hospitals and doctors until he set up his own practice in Paddington. He also persistently worked to prevent syphilis and tuberculosis, which were rife at the time, and was a member of the Committee of the National Council for Combating Venereal Disease and an honorary member of the Anti-Tuberculosis Society.

1914 saw the outbreak of the First World War, and Alcindor knew that his medical skills could help. However, although he was a qualified doctor with 15 years of experience, he was rejected by the Royal Army Medical Corps due to his 'colonial origin'.

Despite the outright racism that he had encountered, Alcindor wanted to help in the war effort and signed up as a volunteer with the British Red Cross. Through his Red Cross voluntary work, he helped an incredible number of wounded soldiers at London Railway Stations who were returning from battlefields. He saved the lives of many young soldiers and was later awarded a Red Cross Medal for his work in the war.

Dr Alcindor was also an activist for the rights of Black people – not only within the UK but across the globe. He was described as 'instrumental' in forming the African Progress Union in 1918, a London-based association of people from across Africa. In 1921, Alcindor became the second President of the African Progress Union. The Union's Annual Report of 1921-1922 announcing Alcindor's election and detailing some of the Union's work is free to read via this link.

Aged 51, Alcindor died in 1924. Whilst he lived on in local legend, his story was mostly lost. However, in 2014, on the 100th anniversary of the WW1 outbreak, members of his family unveiled a Blue Plaque above his former practice in Paddington on national television. The plaque reads 'Dr John Alcindor 1873-1924. Physician, Pan-Africanist and WW1 local hero'.

Kofoworola Abeni Pratt, James McCune Smith, and John Alcindor all qualified as healthcare professionals at a time when it was revolutionary for them to do so - they all also played a major part in the fight for civil rights. The impact they had, not only in their time but for generations to come should be celebrated!

We know that all healthcare professionals are heroic and deserve recognition – whether you are famous or not! This October gives you the perfect opportunity to celebrate your voice or the voice of your Black colleagues.