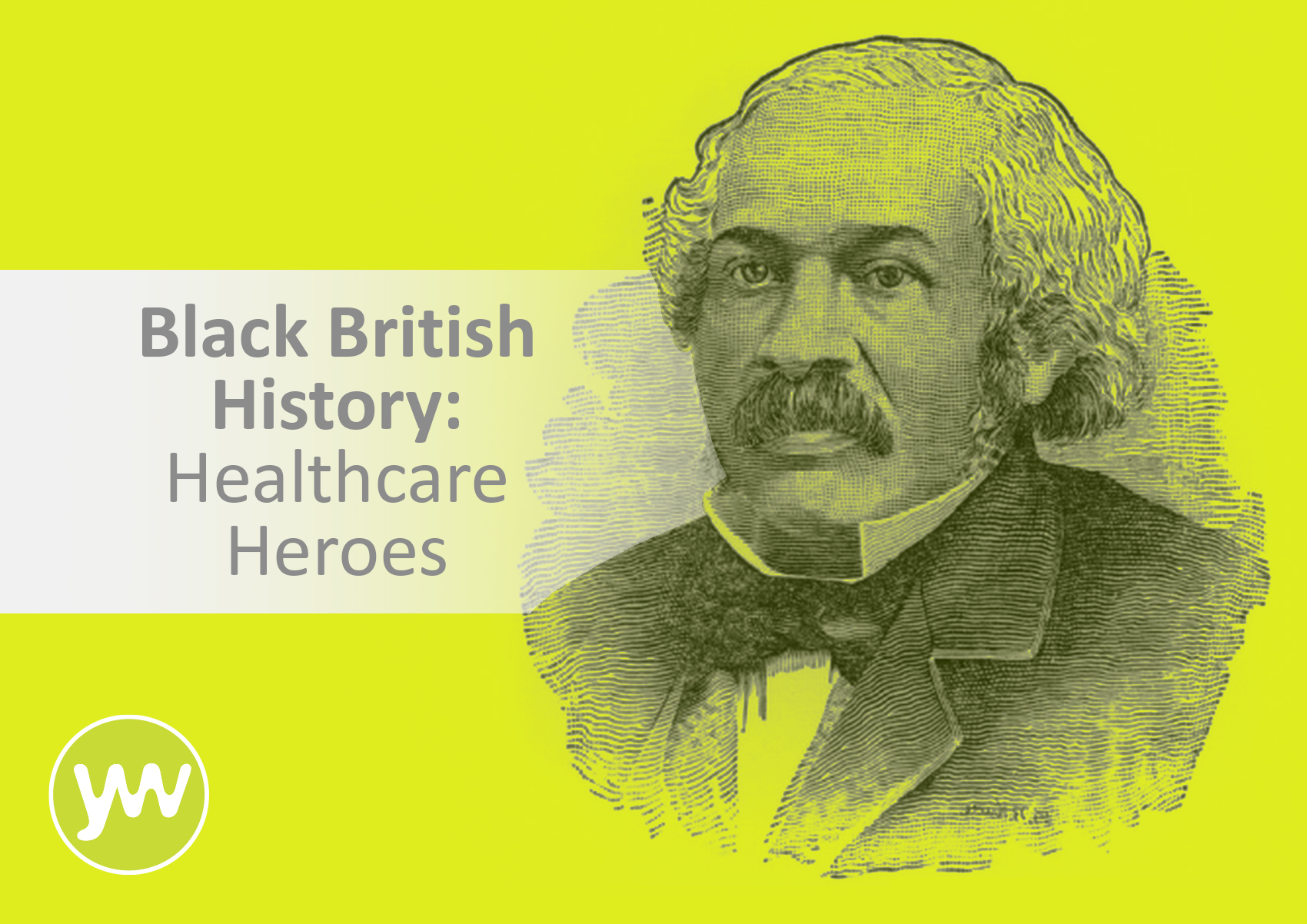 This article follows our previous post in which we profiled three Black British Healthcare Heroes of history as part of our Black History Month spotlight. Black History Month helps us bring forward the stories we may not have been made aware of – but it also provides an opportunity to focus on the amplification of Black voices and experiences.

The last two years have seen the outbreak of the Covid-19 pandemic, which highlighted on a national scale the health inequalities across the UK, and the global awareness of the Black Lives Matter campaign following the murder of George Floyd in 2020. Now more than ever, it is clear that history is not just made in the past, but also the present – so our second round of Black British Healthcare Heroes profiles focuses on three pioneers whose work continues today.

"People in the NHS didn't see sickle cell as a significant public health issue and I was told numerous times: 'Oh well, it only affects minorities.'"

Racially discriminated against when applying to train as a nurse, Dame Elizabeth Nneka Anionwu later became the country's first sickle cell nurse specialist and has been at the forefront in pushing for equality for BAME patients and healthcare professionals.

Anionwu was born to an Irish single mother in Birmingham in 1947. This was a time when single motherhood was disparaged, particularly within many Irish Catholic communities, and Anionwu was placed into the care of a Catholic children's home. Whilst there, she suffered from severe eczema and her skin would tear when her dressings were ripped off, which was incredibly painful. When a nurse visiting the home made her laugh as a distraction from the pain, Anionwu was inspired and wanted to do that for others. This sparked a life-long dedication to nursing.

Aged 17, she applied to four different teaching hospitals within London. At the time, applicants were required to include a photograph of themselves and detail their father's profession. Anionwu, not yet knowing her father, left that section blank. She has said she believes that not knowing her father and being Black contributed to the lack of response to any of her applications – despite exceeding the educational requirements.

She did, eventually, get accepted at Paddington General Hospital as a student nurse but continued to face discrimination and racism throughout much of her career. However, Anionwu did not back down and stood up for both herself and her patients.

In 1972, she discovered her father and found out that he also lived in London. They both embraced their father-daughter relationship, and in doing so, Anionwu was able to embrace both her Irish and Nigerian heritage. Keeping the name Elizabeth, given to her by her mother, she took her father's surname (Anionwu had been christened with the surname Furlong from birth), which she has said was "something I needed to do to make my identity whole".

In her role as a nurse, health visitor, and tutor, Anionwu worked with black and ethnic communities within London, where she encountered patients with sickle cell disease. Sickle cell is a disease that is more common for people with African or Caribbean heritage. In 70's Britain, not much was known about the disease and, because it mostly impacted BAME communities, it wasn't seen as a significant public health issue.

Anionwu then met Misha Brozovic, consultant haematologist, at a talk that Brozovic gave and together, they worked to raise awareness of the disease. Anionwu became the first sickle cell nurse specialist in the UK, and in fact, was the only nurse specialist for sickle cell for six years.

She earned her PhD from University College London in 1988 and worked within the University as a Lecturer in Community Genetic Counselling from 1990 – 1997.

In 1998, Anionwu set up the Mary Seacole Centre, focusing on integrating a multi-ethnic philosophy into every aspect of nursing and midwifery – in recruitment, education, practice, management, and research.

Retiring in 2007, she was not yet finished. Focusing on raising public awareness of Mary Seacole, Anionwu became vice-chair of the Mary Seacole Memorial Statue Appeal and raised money for a statue to be made. In 2016, the appeal succeeded, with a memorial statue of Seacole being unveiled on the site of St Thomas' Hospital. It is the first statue in the UK that honours a named Black woman.

In 2004, she was awarded the Royal College of Nursing Fellowship for her work for sickle cell and thalassaemia counselling services and transcultural nursing. She became Dame Elizabeth Nneka Anionwu (DBE) in the Queen's New Year's Honours List in 2017. The following year, Anionwu was listed as one of the 70 most influential nurses and midwives in the history of the NHS.

Described by the Health Service Journal as a 'powerhouse who has possibly done more than anyone to raise the issue of racial inequalities in the NHS', Yvonne Coghill has – quite literally – set the standard for race equality within the NHS and other healthcare organisations.

At the age of four, Coghill moved from Guyana to the UK with her mother in the 1950s. Her mother worked in Frenchay Hospital in Bristol, and it was there where Coghill first discovered that she wanted to be a nurse. As a child, she would go to the hospital and see the nurses being kind to patients, and it inspired her to do the same.

Coghill began training in 1977 and qualified as a nurse in 1980. By 1986, she had moved into her first NHS management position.

She was spurred into leadership on a national scale, she has previously said, because she had applied for five nursing director roles but was rejected each time, despite her experience and qualifications. From 2004 to 2007, Coghill worked within the Department of Health, including working as private secretary to the then NHS chief executive, Lord Nigel Crisp. Crisp mentored Coghill as part of the Leadership Race Equality Action Plan. However, in 2004, the focus was on changing the people in BAME communities rather than acknowledging that it was the system that needed change.

Since then, Coghill has influenced and led equality and inclusion strategies and programmes across the NHS.

In 2015, she became the Director of the NHS Workforce Race Equality Standard (WRES) programme. She oversaw the implementation of the annual WRES reports and the measures that NHS organisations use to understand how they are doing on race equality. Her work has ensured that race disparity issues remain an essential aspect within NHS Board agendas across the UK.

Coghill is also a faculty member at the Institute for Healthcare Improvement in the USA and has helped develop its inclusion strategy. She has also led a rapid inclusion programme in London, involving short, medium, and long-term interventions intended to "support and help people of colour that are working in the NHS to have a better experience."

Despite announcing that she would retire last month, Coghill has recently worked on a rapid programme of support for BAME staff in London in response to the covid outbreak and is a member of the advisory group of the COVID-19 impact inquiry team for The Health Foundation.

"…without the voices of those people that we say we're serving being involved at every step of the way, we will not get the outcomes that we say that we're trying to drive forward".

Born in Huddersfield in the '60s after her parents moved to the UK from Jamaica, Dr Jacqui Dyer has been described as 'a major catalyst for improvements in mental health care'.

Based in London since 1989, Dyer has held several positions within London communities – particularly within the council of Lambeth, where she has been an elected councillor since 2014. Currently an Independent Health and Social Care Consultant, Dyer's professional experience working within mental health as well as community and social care is extensive; however, Dyer stresses that more important and essential is her lived experience. With personal mental health challenges of her own and her experience of caring for three of her siblings with severe mental illness diagnoses, Dyer is an expert through lived experience. This, in part, has propelled what she calls her life commitment – Black Thrive.

In 2008, Sean Rigg died whilst in police custody. He suffered from a complex and severe long-term mental health condition and had previously been known to services; however, an inquest into his death found that the system had failed him. Following this inquest, Dyer co-chaired the Black Health and Wellbeing Commission in Lambeth. When Dyer sensed a lack of urgency in implementing the Commission's recommendations, she established the Lambeth Black Thrive Partnership for Wellbeing. Black Thrive was set up to connect the community with system leaders to ensure that the voices in the community were heard and to implement real systemic change. From Lambeth Black Thrive evolved Global Black Thrive, of which Dyer is one of the directors.

Dyer's life's work has been tackling racial inequality – particularly within mental health, an area she has said 'picks up the experience of what the rest of people's lives are throughout the rest of the system.'

She has also co-led the Mayoral Thrive LDN programme since its inception in 2017, which is committed to making London a more equal city and improving the mental health and wellbeing of all Londoners.

In 2018, Dyer was an advisory panel member of the Independent Mental Health Act Review and lobbied for a particular focus on African and Caribbean people of the UK – having found an over-representation of Black and minority ethnic communities in crisis but an under-representation in treatment. This led to Dyer co-chairing the Mental Health Act Review African and Caribbean Working Group.

Similarly to Yvonne Coghill, Dyer has been listed as one of the 50 most influential BAME people in health. Dyer was also listed in the top 100 Powerlist of the most influential people of African or African Caribbean heritage in the United Kingdom in 2021 – a year where the judges focused on 'those who have used their voice to advocate against racial injustice.'

Dyer was appointed a Member of the British Empire (MBE) in the 2017 New Year's Honours List for her services to mental health – but her work is far from over.

The central theme for Black History Month 2021 is Proud To Be, but as Black History Month draws to an end, the work of the people we have profiled in this article continues. Likewise, we can all continue to work towards true equality and equity that we can be proud of year-long.