We currently have over 2445 live roles

Fact or fiction: Does a full moon affect hospitals? 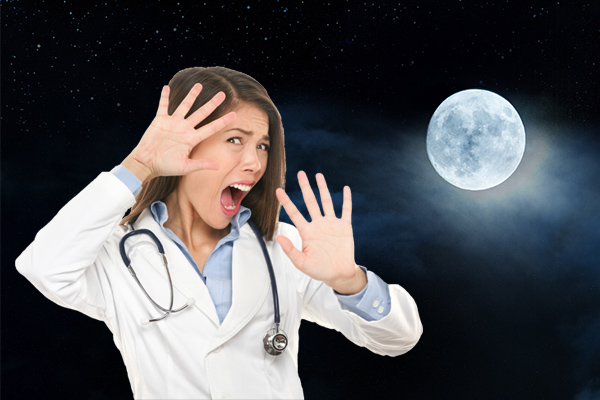 We've all heard tall tales of werewolves and full moons; humans turning into hairy, wolf-like monsters under the light of the full moon and leaving a trail of devastation in their path. It's the stuff of fairy tales, right?

Maybe not if you work in a hospital.

According to the healthcare community, full moons bring some rather unusual events to hospitals, with many Nurses and Midwives claiming that the number of hospital admissions (particularly for A&E) and births increase dramatically during a full-moon shift.

There's no scientific evidence to support how lunar patterns affect humans, but according to a 2011 study published in the World Journal of Surgery, a staggering 40% of medical professionals believe it has an impact on human behaviour.

Some medical professionals are totally convinced

When it comes to a correlation between lunar phases and human behaviour, there is a very noticeable split. Some people claim to believe it wholeheartedly, reporting a major increase in strange goings on when the moon is full, whilst others think the theory is total codswallop.

Along with general reports of craziness, the believers within the medical community have reported an eerie batch of moon-related experiences, including higher volumes of critical care and psych issues, increased rates of attempted suicides, changes in patients with dementia, packed emergency rooms and a significantly higher birth rate.

Think that all sounds a bit far-fetched? Wait till you hear some of the theories behind the changed behaviour...

"A full moon creates more light and affects the level of human activity at night, which would explain why more people are getting into accidents and heading to the A&E department..."

"The moon affects the rides and humans are 80% water, so a full moon probably pulls on the water inside our bodies like the ocean..."

“It’s all to do with pressure in the atmosphere. When a low pressure front is nearing summer or winter, the emergency room fills up and quietens down again when the pressure passes.”

Others aren't having any of it

Every debate needs two sides and for all the Nurses, Doctors and healthcare professionals who are fully convinced about the moon’s weird effect, there’s a whole bunch who just plain disagree. The sceptics among us argue that it’s purely coincidental for a busy shift to fall on a full moon.

One full-time paramedic of 20 years claims to have found no change whatsoever in patient behaviour or the rate of admissions during a full moon. He believes that full moons and holiday seasons are simply a source of blame for people in hospital jobs during a busy shift.

Another NHS worker who dealt with emergency calls for two years also reported no pattern or noticeable increase in bizarre healthcare situations during the 24 full moons he experienced.

There’s no scientific evidence to prove the theory

In his published study for the lunar effect on hospital admission rates or birth rates, Professor Jean-Luc Margot (UCLA dept. of Physics and Astronomy) delves into the myth behind healthcare and the moon. After assessing a wide range of reports and studies on the moon and how it links to hospital admissions, birth rates and complications, and behavioural disorders, Margot did not find a direct correlation and stated: “We can say with certainty that none of these areas of human affairs are affected by the moon,”.

Our research and results

With such a split set of opinions on the subject of full moons and healthcare jobs, we decided to do some research of our own. We created a Facebook poll asking which side of the fence our followers sit and the results were 50-50! According to our research, as many people believe that a full moon plays havoc with hospitals as those who say it’s just a silly myth.

What do you think? Have you ever experienced unusual patient activity during a full moon? Let us know about it by emailing [email protected].

A Thank You to you all

Looking at the statistics from the other side. We spoke to Bill Gerrard, a Professor of Economics, who has been analysing the figures and impact of social distancing but with regards to lives saved.

With "Stress Awareness Month" being held every April in the UK since 1992, Your World couldn't think of a better time to offer you a helping hand.

Working and living as an Indian nurse in the UK

Are you an Indian nurse looking to progress your nursing career in the UK? Find out what it’s like to work and live as an overseas nurse in Wales.