We currently have over 3773 live roles

IELTS or OET - which test should Nursing professionals take? 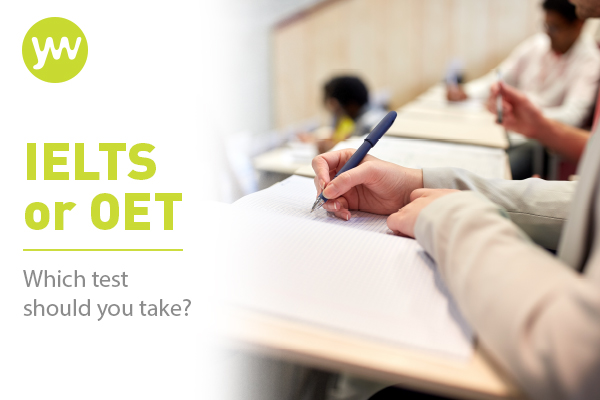 If you're looking at taking nurse jobs in the UK, you may already know that you first need to prove your ability with the English language. The Occupational English Test (OET) is now accepted by the NMC when applying for registration, but is the OET really better than IELTS? Let's look at both tests...

IELTS (International English Language Testing System) is a general English language assessment test that is recognised and accepted across all of the English-speaking countries, including the UK, Australia, New Zealand, Canada and the USA, plus many others.

What is the OET?

The OET (Occupational English Test) is a language assessment test designed for healthcare professionals, which was initially created for countries such as Australia and New Zealand. However, in November 2017, the Nursing and Midwifery Council (NMC) began recognising this assessment as valid for registration in the UK.

Should you take IELTS or OET?

IELTS is always going to be preferable when moving to the UK because it is considered the 'gold standard'. It gives a broader test of the English language and not just workplace specific language. Not only will this have a stronger impact on life in the UK outside of work, but you'll also gain a more widely accepted and recognised qualification.

However, it can be argued that the IELTS focuses on subjects and language that would be irrelevant to healthcare professionals.

For most people, IELTS is definitely the better choice as it covers more countries and provides you with a better understanding of complex English. On the other hand, as a healthcare professional, the OET could be the better option (even more so for nurses) because it uses profession-specific content.

Which test is easier?

As expected, the two tests vary in difficulty. The OET is easier in some ways because it is more specific to healthcare, so you can make use of your healthcare knowledge, vocabulary and experiences. This means that you'd find the writing and speaking portions of the test a little easier, as you'd be used to the situations provided. During the written test, you'll be asked to write a referral letter for a patient, and for the speaking test, you'll need to interact with the examiner, who will be playing the role of a patient.

IELTS is different to the OET - it is not specific to the healthcare profession. This test is typically taken by professionals and students from all industries, which means the topics and content covered will be more general and taken from a range of sources.

How is IELTS scored?

IELTS is scored on a 0-9 band score basis. To pass IELTS, an overall score of 7 or above is required for the Reading, Listening and Speaking portions of the exam. A score of 6.5 is required for Writing.

How is the OET scored?

Unlike IELTS, the Occupational English Test is scored in grades (A-E). To pass, an overall grade of B or A is required.

Here's a brief comparison of IELTS and OET:

You will be asked to listen to 4 recordings and answer questions based on what you've heard. The recordings will be two lectures or monologues and two spoken conversations. The questions will ask you to 'fill in the blanks' or 'match the following', as well as asking you to label, complete sentences and more.

You'll be given three long passages of text taken from journals and newspapers etc. You will then be asked to answer questions and complete tasks based on the reading material. Some of the questions may be multiple choice, true or false, note completion, identification and so on.

The OET reading test has two parts. Part A is made up of four short texts - you must fill in the blanks to complete a summary of the topic being discussed in the texts. Part B requires you to read two longer texts and answer multiple choice questions about them.

The IELTS writing test includes two tasks, the first of which is 20 minutes. You'll need to study and write about some data/graphs provided.

During the second task, you will be asked to write an essay based on a given subject.

The OET writing test will require you to read some case notes and write a discharge, follow up or referral letter based on them.

The IELTS speaking test is made up of three parts, which will include discussing general topics such as your home, family, hobbies and interests, and for the later parts, you'll be given a task card with a topic on to speak about.

You'll have a short, spoken warm-up with the examiner before starting. The main test will comprise two role-plays, in which you'll play a nurse and the examiner will play a patient. The interaction will be based on a selected topic card.

Still not sure what to expect from IELTS? Find sample IELTS questions.

Read our full guide on which IELTS you should take for moving to the UK here.