We currently have over 3304 live roles

Home News World IBD Day - How I was Diagnosed with IBD

World IBD Day - How I was Diagnosed with IBD 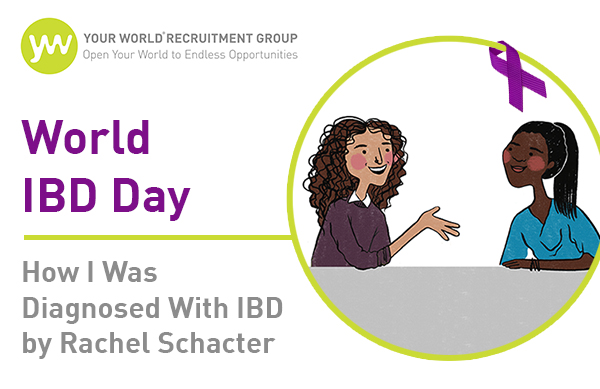 I guarantee that everyone reading this knows someone who has been affected by IBD. For those of you that don’t know, IBD stands for Inflammatory Bowel Disease and includes chronic conditions of the bowel, such as Crohn’s Disease and Ulcerative Colitis. They affect more than 5 million people worldwide.

I was diagnosed with Crohn’s Disease in 2011, when I was nineteen and just finishing up my first year of university. I had always struggled with my weight as a pre-teen and carried a few extra pounds throughout the following decade, but when I hit my nineteenth year the weight suddenly dropped. I couldn’t explain why, considering I was living the staple uni diet of crisps, dried noodles and alcohol. Never the less, the weight fell off and I was more confident than ever.

As a student, I was tired a lot. I would spend hours a day in bed, often choosing sleep over lectures. I shrugged it off and put it down to the late nights out with friends and too much alcohol, but hey I was a student…no biggie.

I blamed alcohol for my constant need for the toilet too. Yes, it’s embarrassing to admit but I was running to the loo every hour. It became so frequent that I was starting to worry about leaving my room (which, thankfully, was en suite), but that didn’t stop me from going out with friends whenever I could. I figured that everyone else was probably experiencing the same thing, so I never thought too much into it.

I was sat with some friends one evening when one of them stopped me mid-conversation to tell me that I had turned paler than a sheet of paper. I told them I hadn’t been feeling great lately but it was probably just a bug and, once again, shrugged it off.

It wasn’t until the final week of my first year that I realised something was up. A trip to the toilet resulted in blood…a lot of it. I stared at the fresh red on the paper and as my brain flashed back to the posters and adverts I’d seen about finding blood, I immediately self-diagnosed myself with Bowel Cancer. I was terrified.

Over the summer, I started throwing up and feeling dizzy all the time. My parents were also terrified as we waited for my hospital tests to start. To be honest, it was all such a blur that I barely remember what tests I had. I do remember the colonoscopy and endoscopy though, and telling my specialist just before the procedure about the sores I had developed on my legs over the past couple of weeks. He looked at me and said ‘I’m now 99% positive that you have Crohn’s Disease, but let’s see what the results say.’

I was awake for the Colonoscopy. I had the most amazing nurse holding my hand the whole way through; I never found out her name (or maybe I did, I was under local anaesthetic). I watched the screen the whole time as the camera worked its way through my colon and was horrified by the number of ulcers I saw. My large intestine was now some sort of ‘Franken-colon’.

I was immediately diagnosed with Crohn’s Disease, plus a plethora of stomach infections and hiatus hernia. The specialist prescribed me with a number of vitamin injections, a course of steroids, and numerous medications that I would be taking indefinitely.

Fast forward six years; I’m twenty-five and have been in remission since diagnosis. I’m lucky enough to have avoided more hospital admissions and any form of surgery. I take good care of myself, rarely drinking, eating right (my Crohn’s isn’t hugely triggered by food), and exercising regularly. Yes, there are times I get sick and need rest because I still struggle with chronic fatigue but overall, it’s manageable. I am fortunate enough to work full-time for a company that understands and accommodates my condition.

If you experience any of the symptoms mentioned above, no matter how small, get yourself to your GP. Don’t be ashamed and put off talking about what is going on.

Have you recently been diagnosed with IBD? Get support from others with your condition.

You can read more of my experiences as a Copywriter for Your World Healthcare here.

Blood Cancer Awareness Month – What Can You Do to Help?

This September is Blood Cancer Awareness Month. Here are some of the ways that you can get involved!

The Importance of Hand Hygiene

Hand Hygiene is the most important way we can avoid the spread of disease and infection; these are the best ways to make sure your hands remain clean.

Our statement on the Black Lives Matter movement